Saturation inductance is a hysteresis loop rectangle relative altitude with high initial permeability, small coercive force, obvious inductance of magnetic saturation point, which is often used as controllable delay switch element in electronic circuit. Its basic principle is that AC coil with iron core under the effect of DC field, due to the AC/DC excitation at the same time makes core state change according to the local magnetic loop in a period, therefore, it has changed the core equivalent permeability and inductance coil. If the core magnetic characteristics are ideal (B – H curve rectangular) , the controllable saturation inductance is similar to a “controlled switch” in the switch power, applied saturation inductance can absorb surge, restrain peak, eliminate the oscillation, which can reduce the loss of rectifier tube when fast recovering rectifier tube in series. 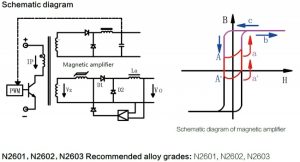